What is Table Hockey? 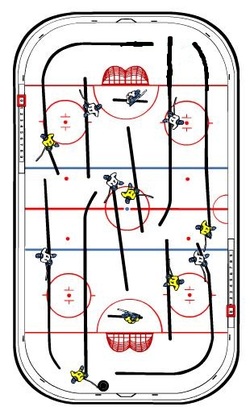 Table Hockey is a game for basically 2 players. Also for 4 players. First of all, the game is what you basically see in the pictures. It is a medium/regular sized rink/game board with 6 rods for each side. Goalie, Left Wing, Left Defense, Center, Right Defense, and Right Wing and ice hockey player figures all over with their own player slots to move up and down. There is a goal at each end and a face-off circle at center ice to drop the puck after scored goals, frozen pucks, out of play pucks, and in overtimes. Each player uses his/her rods in front of them to move their hockey men to shoot the puck into the opposing team's goal. You defend at your defensive zone and go up the neutral zone and shoot in the offensive zone. These tables are very cleverly built to provide different kinds of rods with different spacing between the men. The game is fast, funny, smooth, slick and everyone cheers and laughs. You can get used to playing the game and enjoy it for a long time. Do not be so surprised that when you get so excited that you sweat a little bit from all of the excitement.


Objective: Use your player figures to pass and shoot the puck into your opponents goal while blocking the puck from going into your own goal. You take the center ice face-off, you pass the puck and you try to shoot and score. Always shoot into the opponent's goal.
Match: A match is and can be played in 2 different forms: (1) To a set number of goals (i.e. 5,10,3,etc.) (2) or timed games (5 min, 3 min, etc.)
Tournaments: The pro table hockey players play for the big/top tournament prizes all over the table hockey world. At a tournament the pros would play the same type of game as anyone would. But they play the game much faster, much quicker, and with stricter and higher rules. A typical tournament lasts just 1 day for a time frame between 8 to 10 hours with 2 round robins and a playoff bracket to determine the champion(s).
Rules: The rules of table hockey can be either simplified or complicated:
1. The simple rules would be: Shoot the puck into the net. Your goal is in the front of your end plexiglass, you shoot the puck into your opponent's goal.
2. More advanced rules would include: No spinning, no spearing the goalie. If you score, the other team drops the puck. Be polite, :) No swearing! ;) :) :)